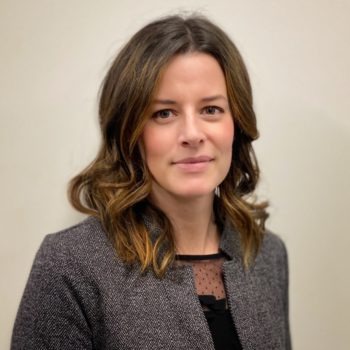 If you missed the Andrew Bleeker event, put on by the Calgary Chamber of Commerce, held earlier this morning you’re not alone.  It was a full house of both agency folks and their corporate clients, all eager to hear the secrets behind the Obama campaign’s digital strategy.  You might not be familiar with Andrew Bleeker himself, but if you’ve ever been online, you’ve certainly seen his work.

Here’s a recap of what is easily the best speech on online marketing I’ve ever seen.  (It’s a long read, but don’t get scared, you’re about to learn a lot.)

Bleeker starts out by mentioning that in 2008, digital wasn’t something that moved metrics, or rather Obama campaign business goals.  However, in 2012 it was a different story.  They’d learned a lot over the previous 4 years, had more levers, and understood how they could use them to produce desired results.  Including the most popular tweet ever: 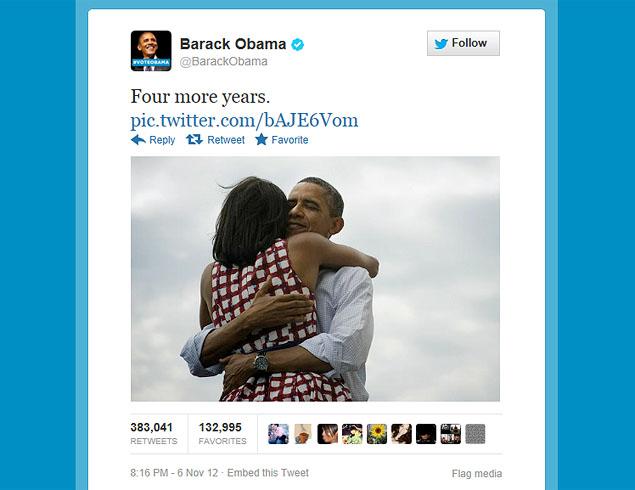 The presentation focused on 5 critical success factors which I will outline below.  The audience was encouraged to tweet updates and ask questions via twitter.  Normally this provides a fantastic record of key points for those that are not at the event.  Unfortunately, we were a little too keen at 7.00am and somehow managed to crash the local twitter server.  I was frantically taking notes and hopefully I’ve captured his presentation accurately.  Feel free to correct me if necessary in the comments.

No surprise here – planning gets you everywhere.  Bleeker discusses how the Obama campaign was able to frame the issues and define Mitt Romney before he was even the Republican Presidential candidate.   By framing the conversation on Mitt Romney early, many people already knew what they thought about Romney by the time he was confirmed as the candidate.

Bleeker showed a graph demonstrating the ROI of building your audience by investing in acquisition techniques early.  It highlighted that the greatest ROI came from the earliest money they spent.  Bleeker recounts a conversation where they’d literally just opened a bank account and he’s making the case to start spending A LOT immediately.

He highlighted how starting early allowed them to make online ad buys for critical time periods, in critical states, before the competition did.  You’ll learn how this gave them a huge advantage in a little bit.  (Patience grasshopper.)

This is something we talk about a lot here at Vovia, but Bleeker takes it a whole new level.  They were able to understand not only the demographics of those they wanted to reach, but the exact individuals.   Most of us have access to incredible amounts of data, but what do we do with it?  The power, says Bleeker, is the ability combine it, understand it, and act on it quickly.  To tailor your message directly to those you are interacting with.

How do we do this ourselves?  Test everything.

Bleeker showed us the donation page that was most effective at getting people to donate to the campaign.  He mentions that it looks nothing like it did initially.  There were about 4000 different versions tested over the course of the campaign and the final one was about 4 times more effective at generating donations than the intitial one was.

He cautions – don’t fall into the trap of defaulting to the opinion of the “highest paid person”.  We all laughed at this point, but let’s be honest here – how often do we do what the higher ups do because that’s the way it’s always been done.  When in doubt, offer an alternative – TEST two ideas!

So often we think that traditional and digital must be exactly the same (part of that whole brand thing I suppose).  But with the Obama campaign, testing with digital allowed them to fine tune the message so that by the end of the campaign the digital messaging actually informed their television messaging.  He admits that they should have done this earlier, that they were a little too married to the “brand” instead of focusing on what would get results.  I think his comment was along the lines of “Sometimes your brand is NOT what works online, so be prepared to have a little flexibility.”

One thing that oddly, tested really well was constantly increasing the size of Obama’s head in the banners for email creative .  They increased it, until they couldn’t make it any bigger!  Whatever works right?

How are you engaging and empowering your supporters?  What are you asking your audience to do?  Bleeker mentions utility.  Give people something to do.  And start small.

I particularly enjoyed the comment “No one wakes up in the morning and says – Today I’m going to advocate for X brand.”

You need to start with what he calls “Lower Bar Actions”.  What are these?  Well, it could be “Learn More”, it could be “Calculate Where the Price of Gas is Coming From”.  The point is that if you make a BIG ask right off the bat, you lose the opportunity to develop a relationship with someone who could be your next customer/advocate.

“Reduce the steps to action” – put simply, people are not to give you their email address just because that’s what YOU want.  You need to find out what THEY want and give it to them.  But, get to the point quickly!  His example here was on having payment details autosaved to make it easy for people to donate.

Where is your audience?  Think Mobile.  Bleeker emphasizes that it’s not enough to have a mobile site (you need one, by the way), you need to create a mobile experience that allows your audience to engage with you.

Finally, another important thing that’s often overlooked – say thank you.  If you’re asking people to act as your advocate, thank them!  And do it in a way that’s authentic.  Bleeker talks about Obama thanking his people in a not-often-seen display of emotion.  It was a side of the President that most people don’t often  see, but this unscripted display of gratitude went a long way.

In today’s environment when news is happening around the clock, how do you know when to respond to something?  How do you avoid being sucked in by every little critical conversation?  And most importantly how do you do it in a way that is “on brand”.  Bleeker offers a very simple strategy – ask yourself “Is the topic on message?”

The message for the Obama campaign in 2012 was “Forward, Not Back”.  If an issue came up, how can they frame this in a way that demonstrates that Obama represents moving forward, and Romney represents a step back?  He also talks about how important it is to Lead with Facts and shows an incredibly powerful graph that shows job creation (or losses) under George W. Bush and then under Obama.  He emphasizes – we already had the data, we just put it into a more shareable form.  Because it was facts, it’s difficult for the opponents to fire back. 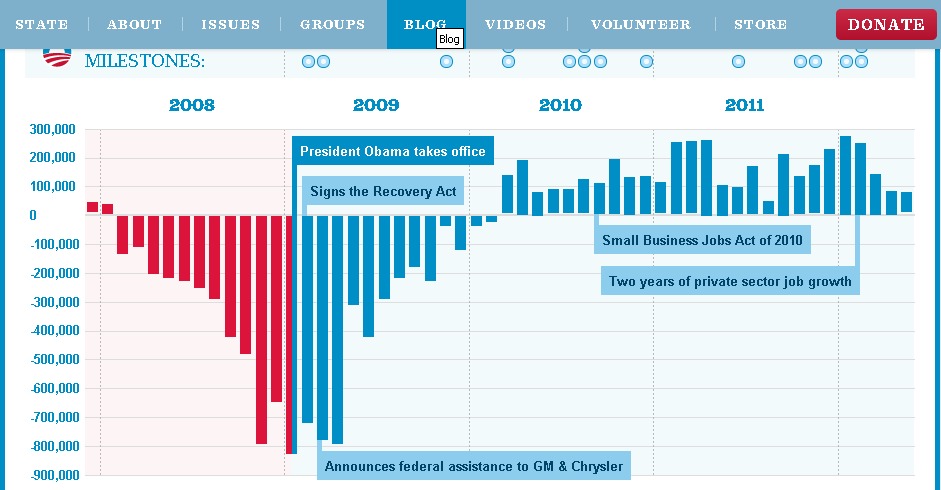 Another good tidbit was “stuff that does well might not be stuff that’s helpful”.  His example here is a picture of the President with his dog.  People loved to share this picture, but the campaign might have wanted them to share an infographic on something more meaningful.

He talks about the two different kinds of moments: organic and created.  Organic moments just happen, and often they present an opportunity to further engage your audience by leveraging something the other side says or does.  I remember Twitter absolutely blowing up with witty commentary on Mitt Romney’s disastrous comment on “binders full of women”.

Created moments are more scripted – here his example was convincing President Obama to spend 30 minutes engaging with Redditors as part of the popular AMA (ask me anything) feature on the site.  (If you haven’t yet read Obama’s AMA – check it out here.)

Another piece of marketing genius is revealed when he talks about how young people consume media, specifically the debates.  They don’t watch on tv, they watch online.  Guess whose Twitter feed appeared next to online broadcasts of the debate?  Obama’s.  They were able to counteract misinformation put out by Romney during the debate by tweeting about it.  How did they do it?  Remember those strategic ad buys they did early on in the planning stages?  Well played guys.  Well played.

Other moments he mentions are the popular Hillary Clinton meme (don’t worry, he had to explain meme to the President too, it’s basically an inside joke that goes viral online).  In fact, Clinton wasn’t known for being all that tech savvy.  She managed to dispel that myth by creating her own content for her own meme!

Finally, Bleeker talked about the key trends moving forward.  This was his last slide so he didn’t elaborate on it to the extent of the examples above.  He does list 6 trends but ultimately said it boils down to 3 things that I completely agree with: Metrics, Message, and Media.

If you couldn’t attend, I hope you found my recap useful.  I found myself nodding along constantly during the presentation because Bleeker’s best practices cover many of the same things that we encourage our clients to consider.  The event was put on by the Calgary Chamber of Commerce.  Vovia was proud to be a sponsor along with Hill + Knowlton, and the Bissett School of Business at MRU.

If you’re interested in learning more about online marketing – why not subscribe to our enewsletter?  Every month you’ll get our take on what’s new in the online space along with practical tips on how this relates to business.