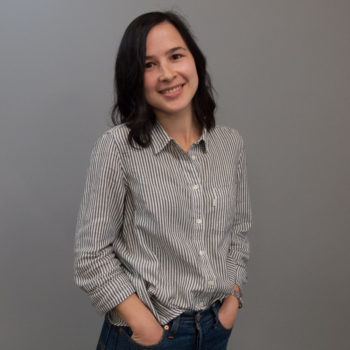 Dina is a Digital Marketing Specialist at Vovia. When not travelling to new and exciting places, hiking in the mountains, and learning new ballet skills, you will find her curled up reading a book or knitting something warm to wear.

Other posts by: Dina Komissarova

Social media platforms that utilize vertical video formats like TikTok, Facebook Stories and Instagram Reels have been getting more and more popular, and ads are shifting in the same direction to keep up with ever-changing user preferences. This makes vertical video assets an essential part of a successful social media marketing campaign.

We find there is one social media platform where the vertical video format is often overlooked…YouTube. YouTube initially gained success as a video-sharing platform in the 2000s and has historically used horizontal videos. And thus, the ads on the platform were understandably the same format.

Consistent growth in mobile usage over the years and the increasing popularity of vertical video formats made YouTube consider a shift as well. First they added a vertical video option to show up on mobile devices, and then they launched YouTube Shorts as an additional format, an entirely mobile and vertical experience with over 30 billion daily views and 1.5 billion monthly logged-in users (YouTube Internal Data, Worldwide, April 2022). YouTube Shorts are at most 60sec long (though ideally shorter) and are ‘TikTok-style’ videos, meant to align with the trends of video-driven content and the viewing habits of Gen Z.

Vertical videos can be used on YouTube Shorts but also with YouTube videos, whether they are horizontal or vertical. When users are watching it on their mobile devices and holding the phone vertically it will reorient to align with the orientation of the phone. The vertical video placement is also widely used on Google Display network (outside of the YouTube experience in mobile apps, etc).

Another bonus for YouTube Shorts is its impressive organic reach potential: Shorts has one of the best organic reaches on the platform, most likely due to the YouTube algorithm, the short form length of the videos, and the ability to include tags and keywords. This means YouTube Shorts can help you reach new audiences, especially Gen Z, 85% of whom spend time on YouTube.

In May 2022 Google announced that Video Action, App and Performance Max campaigns will automatically scale to YouTube Shorts. If your campaigns are only using horizontal videos, they may look odd on a mobile device with empty black areas and small, unreadable font.

To ensure a better user experience, it is considered a best practice to have horizontal and vertical formats as a part of your YouTube campaign. While this has been suggested long before May 2022, it has become especially important with the significant growth of the YouTube Shorts daily audience. Based on Google internal data, when advertisers added a vertical creative asset to their Video Action campaigns, they delivered 10-20% more conversions per-dollar on YouTube Shorts than campaigns that used landscape assets alone.

Here are some numbers from one of our clients who has been using vertical videos since July 2022 as a part of their Video Action campaign.

With the strong growth of YouTube’s audience, growth in time spent and growth in mobile usage, it is essential to have vertical creatives to ensure a better user experience, especially given that Google automated campaign types are now tapping into YouTube Shorts placements by default. Next time you’re planning creative for an upcoming campaign, be sure to include vertical video. And if you want help with your next YouTube campaign, learn more about how we can help you here.