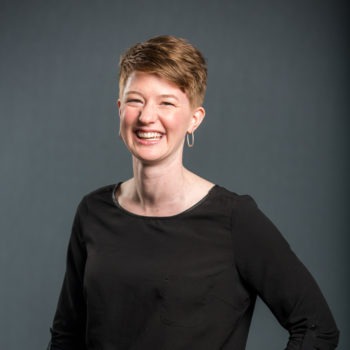 Andrea is an Account Director at Vovia. Nothing brings her more joy than seeing a project through from planning to execution to results. When she's not sending emails or creating work back schedules you can find her on the trails or on the pavement wearing out her running shoes.

Other posts by: Andrea Gibson

It was about 5 years ago when the Vovia team was surprised by food trucks and coolers full of beverages outside of their office. But who was it from? What was it for? Then the ATB Financial Reputation & Brand team strolled in and a new relationship was born.

Thinking back on the last 5 years of working with ATB Financial is a bit surreal. It has gone by so quickly. Although I wasn’t there for the food trucks in Calgary, the Vovia team would retell the story for me several times over the years. When I asked our team about some of their favourite memories with ATB that one came up quite a few times. The ATB team made an impact on us from day one. Since that day we have planned numerous campaigns, set up and executed countless channels, and reported on a plethora of numbers. But wait… generalities are no fun. Let’s be a bit more specific!

What has been the most memorable campaign with ATB Financial?

It’s hard to choose the most memorable campaign that we’ve worked on. For me, it would be a toss-up between the Amplify Campaign targeting small business owners (you can read more about that one in an earlier blog post here) and the “This is Why” Campaign. I like them for different reasons but the common thread is the message behind them. At the heart of ATB are a group of people doing what they can to lift up the individuals and businesses of this province and I feel like these two campaigns did a really good job of communicating that.

The “This is Why” campaign featured many amazing people and businesses across the province. These people had the opportunity to share stories about how ATB has impacted their lives. Who would have thought the relationship you have with your bank could be so emotional! As a brand campaign, metrics on performance can be more challenging because they are largely awareness-based.

From a media standpoint, they had different objectives. Amplify’s goal was to communicate all of the offerings that ATB Financial had for entrepreneurs in Alberta and encourage them to connect with an expert in some way for information/advice with lead generation being a significant KPI. I won’t go into too much detail because my other blog post does that, but we exceeded our goals and I got to listen to Beni Johnson’s inspirational anthem multiple times. It was fantastic.

The Vovia team worked closely with ATB’s research partner and their internal data and research teams to holistically report on the campaign’s successes, and established metrics that would best demonstrate that awareness and how the campaign was working to build qualified audiences for other campaign messaging. Through message sequencing, we were able to establish pools of people based on their engagement in the campaign and better serve them relevant products and services. Both teams worked together to ensure the direction made sense for the business as a whole and that all areas of expertise had a good understanding of how the pieces all fit together.

Other Memories from the Team

I reached out to a few team members at Vovia as I reflected to ask them for a few of their favourite memories too. Denise, Group Account Director at Vovia, remembers working on the ATB Listens campaign fondly. It was the first one we worked on with them and it had so many moving pieces. It was a great experience in getting to know each other, learning how to work together, and partnering to change how Albertans saw ATB and explain how they were different from other banks.

ATB pushes us as an agency to bring forward new and innovative ideas and that’s something our VP of Media, Stacey McIntyre, really appreciates. From new channel testing on platforms such as Quora and Cluep to new bidding strategies and ad types on Google and Facebook, ATB was often game to try something out. We didn’t always get to execute on all of our ideas but it has been so much fun to be able to stretch ourselves and have a space to be able to test.

Outside of the campaigns, we’ve also spent a lot of time getting to know each other which has helped our relationship by building trust and collaboration, getting to know each other as individuals, and having some fun. Our VP of Client Service, Heather Ilsley recalled a number of social events – everything from developing new flavors of gelato at Fiasco Gelato, attending a small-town rodeo, to a hilarious session of drag queen bingo that our two teams participated in as part of our annual retreat.

We’ve had so much fun getting to know every person on the ATB team. The people and the moments where we got to spend time with them outside of a project setting are the ones our team consistently told me have been their favourite memories. For me personally, I’ve had the opportunity to spend more time with people from the industry I knew beforehand and create new relationships that I know will last a lifetime. You really can’t ask for more when you work at an agency. I have so much to be thankful for and appreciative of. Thank you to those that I’ve worked with at ATB past and present, and to my team members at Vovia who have dedicated so much of themselves to the account. We have all done great things together the last 5 years and I appreciate you all.